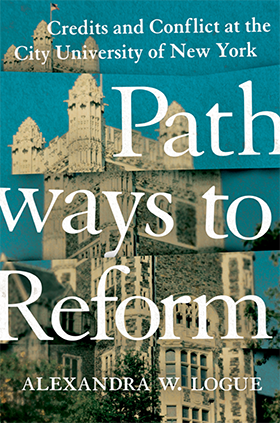 Pathways to Reform: Credits and Conflict at The City University of New York

Change is notoriously difficult in any large organization. Institutions of higher education are no exception. From 2010 to 2013, Alexandra Logue, then chief academic officer of The City University of New York, led a controversial reform initiative known as Pathways. The program aimed to facilitate the transfer of credits among the university’s nineteen undergraduate colleges in order to improve graduation rates―a long-recognized problem for public universities such as CUNY. Hotly debated, Pathways met with vociferous resistance from many faculty members, drew the attention of local and national media, and resulted in lengthy legal action. In Pathways to Reform, Logue, the figure at the center of the maelstrom, blends vivid personal narrative with an objective perspective to tell how this hard-fought plan was successfully implemented at the third-largest university in the United States.

Logue vividly illustrates why change does or does not take place in higher education, and the professional and personal tolls exacted. Looking through the lens of the Pathways program and factoring in key players, she analyzes how governance structures and conflicting interests, along with other institutional factors, impede change―which, Logue shows, is all too rare, slow, and costly. In this environment, she argues, it is shared governance, combined with a strong, central decision-making authority, that best facilitates necessary reform. Logue presents a compelling investigation of not only transfer policy but also power dynamics and university leadership.

Shedding light on the inner workings of one of the most important public institutions in the nation, Pathways to Reform provides the first full account of how, despite opposition, a complex higher education initiative was realized.

All net revenues received by the author from sales of this book are being donated to The City University of New York to support undergraduate student financial aid.